Things are heating up.

That's the two-year-old horse racing reason. Once again I must apologise for those who have been waiting for the mailings to be sent out on a regular basis. Life has been getting in the way but when I get a moment you will see a new email.

So the first month of the season has come and gone. To be exact, the month of April and two races in the month of March.

My first mailing detailed that in 2019 (the 2020 season wasn't counted as it was an anomaly with the season starting in June) that 75% of the winners were priced 11/2 and less SP.

This season has been pretty much the same with 76%.

It's interesting how many patterns can be seen within the two-year-old racing whether it's trainers, jockeys, betting...

Basically, most things follow a pattern and in that sense can be relied upon.

Anyway, that was all something and nothing. I've noticed that the Chester May meeting is on the horizon and the Lily Agnes has 16 two-year-old (2yo) entrants. This seems quite a large number compared with previous years. I don't know the exact number but it's the first big juvenile race of the season.

This 5f race has a rich history. 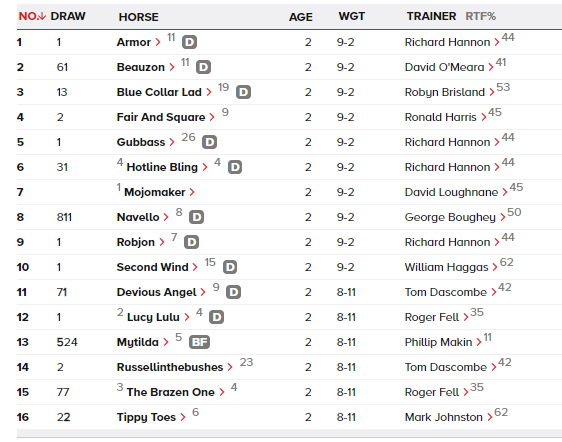 Remember this is the first entry stage and the final declaration will see a maximum of 12 runners. I would imagine it will be 9 or so as it's often the case those with a wide draw are non runners (self certificate).

At the time of writing, 10 of the potential runners are winners.

I will give an update the the final declarations are made.

Take a look at these previous winners.

Result: By the time the race started the 2021 Lily Agnes had just 4 runners.

The former, the owner of the sire, Ivawood. Navello ran out an impressive winner and looks a very good two-year-old who is likely to improve for a step up to six furlongs.

See the full result of the 2021 Lily Agnes Stakes Here.

ICM Stellar Sports is one of the biggest and most successful sports agencies in the world. Find out more: https://t.co/aP30kMnEf3 pic.twitter.com/dplyklScYl

Could well go to Royal Ascot and take some beating.